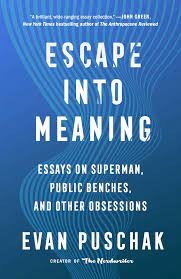 On writing as a superior form of thinking

From Emerson, I learned two fundamental truths: first, that we learn by expressing, not by thinking, which is to say that knowledge doesn't really exist until you can write down. What we normally imagine as thinking is really just a distracted form of writing, like having a disoriented drunk at a typewriter behind your eyes. Writing sobers him up. […] Second, the mind doesn't need cogent thoughts to operate. […] My brain was getting along just fine in all its hypocrisy and contradiction. If I kept myself busy, I barely noticed the inconsistencies.

Emerson rails against conformity as an epidemic evil: Whoso would be a man must be a nonconformist, he says. Nothing is at last sacred but the integrity of your own mind. We should refuse to capitulate to badges and names, to large societies and dead institutions, then prepare for a backlash to that refusal: For non-conformity the world whips you with its displeasure

On self-schooling and old book

It turns out that the books I was assigned in high school are brilliant. It turns out the irony in Pride and Prejudice really is significant. In school, I saw that book as a hurdle, one of many on the long path from ninth-grade English to some nebulous future job

This is a feeling I keep running into myself the older I get, the farther I get from those high school days where reading that big assigned novel felt like a chore and those hours spent interpreting that text in class felt like a subjective meaningless way of wasting time. Who knows what the author really meant, you can come up with any theory you'd like and it's probably ok, why is the professor's opinion the right one? - this was the mainstream thinking among students.

Turns out those discussion were indeed meaningful, and regardless of how correct my teacher was, the correctness was never the point. The point was to read, observe, emphatise, and reason about your reading, so that you may hopefully develop your own intelligence, intuition, and perhaps creativity.

Maybe our young brains were not ready at the time. Maybe the mechanical, structured learning environment that only offered grades as the purpose of this effort stood in the way. I look back on those days now and can finally see there was a point to it all, and there was much learning to be done. Not about this poem or that novel, but about how to think.

I like to think I still got something out of those days, but I always feel like I could have gotten more. I wonder still, what opportunity do I have today, that I will perhaps only in the future look back on and realize how much more I could've gotten out of it. Perhaps a sign of how far you've made it along in your journey is how short the distance between those past moments of opportunity and the present realization that there was (or perhaps is) an opportunity at hand. When the distance is zero, are you operating at full capacity? Can this distance ever be zero?

I think the internet wants to be my mind

The modern world is built to obliterate restraint, and technology enthusiastically leads the charge

After I watch a YouTube video or see an Instagram post, I instinctively scroll to the comments to see what others think. The number of likes and dislikes offers me a ready made judgement. When you're moving hurriedly from post to post, those judgments are handy - until you reach the end of the day and realize the comprise most of your point of view. You like in bed and wonder: What do I think?

On a website like Reddit (or anywhere else really) where there is a link posted and then discussion happens below that link, how many people do actually read the linked material, whatever it might be? If it's a long form article and not some funny gif, I'd wager very few do. It's far easier to just go to the comment section and see what others have to say about it. What does the top upvoted/liked/retweeted post has to say? That's what becomes the consensus, and that's often what you end up taking from that discussion. For just a moment, of course, because the next link is a scroll wheel away, the next notification popped up, the next mail newsletter trying to upsell you the author's course has arrived.

I found my own personal consumption patterns on the internet to match this behavior. I call it unconscious reading. I read, absorb what the consensus is, and move on. At the end of the day, like the author, I indeed ended up thinking, what do I think?

The alternative I've been working rather hard to implement, is conscious, deliberate reading. No unsolicited information is allowed to nudge me into consumption anymore. I keep feed scrolling to a minimum, I subscribe to only a few newsletters, I turn off most notifications. I try to deliberately look for any information I might be interested in, focus not just on reading, but on interacting with that piece of information, and trying to reason my own way around it. I might miss out on that genuinley interesting post that was just on the front page of Reddit, but was I really going to ever follow up on that? I have tons of bookmarks of stuff I found interesting at some point that I promised I would look into in more depth later.

Now I try to go the other way around. What am I interested in, what would I like to learn? Well, go look that stuff up. Find books on that topic and read them. Write down what you have learned. Save notes and highlights and go back over them. In this age of information fire hosing it's not easy to take this path, and I do often fall into the same old pitfalls of mindlessly scrolling some feed somewhere, but whenever I do take the deliberate path, I do tend to regain my focus, and feel much better for it.

The comforts of cyberpunk

A definition of cyberpunk

Cyberpunks married a hard sf approach to technology (cyber) with a sub cultural perspective (punk). Or as Sterling puts it: An unholy alliance of the technical world and the world of organized dissent - the underground of pop culture, visionary fluidity and street-level anarchy.

Faceless multinational corporations rule these futures, but the stories take place on the streets in the endless urban sprawl, where small-time crooks and marginalized loners repurpose the overflow of tech to make their scores, to sow chaos in virtual systems, or just to get high. Bodies fuse with machines, brains mesh with ports that link them to the other essential backdrop of this sub genre: cyberspace.

On the impersonal metropolis

Simmel and those whose came after rightly deemed this potential loss of self a danger - maybe the danger of greater urbanism. A century later, these alienating forces have only grown more severe. Cities got bigger and more complex. Relationships became more impersonal, more mediated by money and technology, more transactional. […]

The city's special brand of loneliness is often crippling. It can exacerbate antisocial tendencies in a vicious loop, resulting in anxiety, depression, and violence, like Travis Bickle's bloody rampage in the final minutes of Taxi Driver. There's no question that the metropolis has curdled its share of souls

There is a flip side to this fact. The same way a large party will often feel more private than a small party:

For the same reasons that a city can be alienating, it can also be a site of freedom. For Baudelaire's flaneur, the loss of self is not agony, but ecstasy. He becomes a kaleidoscope fitted with consciousness in an immense reservoir of electrical energy. Even Simmel acknowledges that the metropolis assures the individual of a type and degree of personal freedom to which there is no analogy in other circumstances

A poetic scene of violence in Blade Runner:

Short crashes through shop windows as deckhand's bullet shatters her shoulder. She cries out, then falls in slow motion, shards of glass raining over her. Angela's synthesizers echo. With failing strength, Zhora manages to rise only to be pierced by a second bullet, launching her through a retail display of gently falling snow. Momentum carries her into the street, where she collapses onto a bed of shattered mirrors that reflect the multicolored neon of an indifferent city.

That is such a mesmerizing paragraph to me, more impactful than even the actual movie scene that depicts it.

City benches are also the best places on earth to people-watch, one of my favorite pastimes. The parade of humanity is endlessly fascinating, and from the bench you can watch it with the special anonymity cities provide. In my essay on cyberpunk I wrote about the liberating feeling of disappearing into a metropolis. Under that invisibility cloak, you can really see others - without being preoccupied by their perception of you, or what you think their perception is. Maybe I'm overly self-conscious (I definitely am) but my mind is too busy during social interactions to observe the people I'm interacting with. mostly I'm jus trying to make it trough the conversation without embarrassing myself. There's a tranquility to people watching I rarely have when socializing. Public benches disappear into the background with whomever is on them, and in that camouflage the bothersome ego can disappear, too.

In Life Between Buildings, the Danish architect Jan Gehl discovered another obvious but under appreciated truth: to achieve a variety of interactions you need to get lots of people in the same place. Fortunately, this is what human beings like, even if they say otherwise. In his study, Whyte learned that individuals instinctively congregate - they self-contest - despite saying they want space and escape from others. As a result of this confusion, many urban spaces are designed as if what people liked best were the places they stay away from.

One reason why old towns in Europe are so pleasant to stroll through. They were honed to suit the needs of a pedestrianized public that used outdoor space as a communal living room. It's why they're often better for socializing than the planned cities that came after, the cities designed for aesthetics, for buildings, for interiors, for commuters.

I love advertising because I love lying. In advertising, everything is the way you wish it was. I don't care that it won't be like that when I actually get the product being advertised - because in between seeing the commercial and owning the thing, I'm happy, and that's all I Want… we know the product is going to stink. We know that… But we are happy in that moment between the commercial and the purchase, and I think spending your life trying to dupe innocent people out of hard-won earnings to buy useless, low quality, misrepresented items and services is an excellent use of your energy

All things on Earth only exist in different stages of becoming garbage. your home is a garbage processing center, where you buy new things, bring them into your house, and slowly drapery them over time

Seinfeld is great and this is the type of comedy I enjoy most. George Carlin and a few others have similar bits that are just a joy to watch/listen - both funny and enlightening.