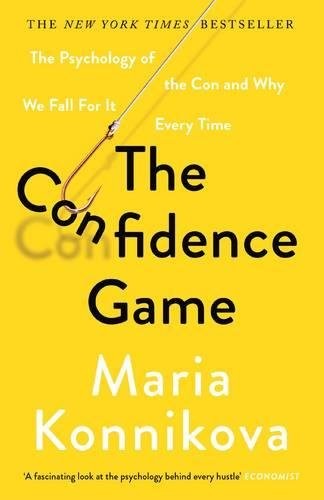 The pledge, the turn, the prestige

A fun book, chock-full of anecdotes and stories of deceptions, scams, and fraudulent schemes exposing not just the ingenuity of their perpetrators but also the gullibility of their victims. The lesson of course is we all are just as gullible.

There’s a likely apocryphal story about the French poet Jacques Prévert. One day he was walking past a blind man who held up a sign: “Blind man without a pension.” He stopped to chat. How was it going? Were people helpful? “Not great,” the man replied. “Some people give, but not a lot—and most just keep walking.” “Could I borrow your sign?” Prévert asked. The blind man nodded. The poet took the sign, flipped it over, and wrote a message. The next day, he again walked past the blind man. “How is it going now?” he asked. “Incredible,” the man replied. “I’ve never received so much money in my life.” On the sign, Prévert had written: “Spring is coming, but I won’t see it.

One of the reasons behind our gullibility? Trust. Life is just easier if you don't question everything. It would be practically impossible without some level of trust and implicit assumptions that things will work out ok. Some of this is of course logical, based on previous lessons, and recognized patterns. Not all patterns are what they seem, however, and it's on this fine edge that the scam artis plays with our perceptions and assumptions.

Countries with higher levels of trust tend to grow faster economically and have sounder public institutions. People who are more trusting are more likely to start their own business and volunteer

The more adept a swimmer was at self-deception, the researchers found, the more likely she was to have made the cut. It wasn’t the people who saw the world most clearly who did best; it was, rather, those most skilled at the art of seeing the world as they wanted it to be. And the world-as-we-want-it-to-be is precisely what the con artist sells

Educations, age, background, etc, don't have much of an impact on how likely you are to be a victim of scam, just on the type of scam you are likely to fall victim to.

Victims of investment frauds, like Bernie Madoff’s Ponzi scheme, and business opportunity frauds, like a lucrative investment in a new oil field, were more likely to be well-educated older men who made over $50,000 a year. Lottery frauds, on the other hand—fake tickets and the like—were likely to claim victims who were less educated and earned less money. When it came to prescription drug fraud and identity theft, the typical victim was a single female who made less than $50,000 a year. Older adults were more likely to experience a different type of con: from within the family, or by someone close to them. In a 2012 survey from the Elder Investment Fraud and Financial Exploitation Program, the top two risks to older adults were theft or money diversion by family members and theft by caregivers. Strangers came in third place.

In one series of studies, Epley and his colleagues found that people were far slower to discern a different perspective from their own, and that under time pressure they were unlikely to do so at all. He called it “egocentric anchoring”: we are our own point of departure. We assume that others know what we know, believe what we believe, and like what we like.

We know, theoretically, that we should pay more heed and exercise caution, that we should incorporate other people’s perspectives into our own, walk a mile in their shoes, or whatever other cliché we want to invoke. But practically, we remain superbly egocentric in all our judgments.

Narratives have larger impacts than direct appeals. It's why advertising is seemingly never about the product

No one questions a cancer victim, just like no one questions an escapee from human trafficking. I could refuse money to a man whose car broke down—I can question that fact, ask to see the stalled vehicle, offer a ride to a gas station—but I can’t refuse to be generous to a man who is trying to make it to a sick child. Facts are up for debate. Stories are far trickier. Emotions on high, empathy engaged, we become primed for the play. The best confidence artist makes us feel not like we’re being taken for a ride but like we are genuinely wonderful human beings.

so strong is narrative that it has been shown to be one of the few successful ways of getting someone to change her mind about important issues. In fact, Michael Slater says, gripping narratives may often supersede any logic or more direct tactic: in some cases, it can be the only strategy for getting someone to agree with you or behave in a certain way, where any direct appeals would be met with resistance

In 1988, Shelley Taylor, a psychologist at the University of California at Los Angeles, proposed that humans have a strong bias toward misperceiving the world. We don’t just think ourselves exceptional. We predict our lives will always go well—better than before, even. We are programmed, in a sense, to think a bit too positively about how things will turn out—even the things we have no actual control over. It’s a tendency known as the positivity bias or optimistic bias, and it is a version of our belief in our own exceptionalism, but one that centers on our life outcomes: how we’ll fare, how things will go for us, the extent to which we control our environment and the events that transpire therein. Even pessimists experience it; it’s optimism not about the world or people in general, but about yourself. The most sour skeptic still thinks he will come out on top.

It's hard to free yourself once you've been roped in.

Once we’re in the game, it’s easiest to follow the path of least resistance. It justifies what we’ve already done and reduces the effort we need to make going forward. The deeper we get, the more difficult psychologically it becomes to extricate ourselves, or to see that we’re even in need of extrication. All of the factors are aligned against us.”

Besides, we tell ourselves, the moment I see a red flag, I’ll get out. I can always get out. This is my choice, my situation, my life, and I am in control. The reason I haven’t gotten out up until now is that there have been no red flags and no reason to do anything other than what I’ve been doing. I can change my mind whenever I want, if I see a reason to change it. I am, after all, smart, successful, and naturally skeptical.

Gossip makes the world go around.

When the researchers analyzed the topics that had been covered, they discovered a surprisingly consistent pattern. It didn’t matter who was doing the talking or where it was taking place, whether you were younger or older, male or female, clearly in school or clearly not: over 65 percent of every conversation was taken up with social topics—for the most part, discussing others’ behavior and analyzing your own relative merits, or how others acted and what kind of a person you are. That means that every other topic combined—work, school, sports, culture, art, music, and everything else—is only one third of our typical conversation. Everything else is, in one way or another, concerned with reputation, others’ and our own. In some cultures, that percentage appears to be even higher. In one study of Zinacantán Indians in Mexico, social topics occupied 78 percent of nearly two thousand recorded conversations”

The whole world doesn’t in fact lie, cheat, and steal, and life isn’t nasty, brutish, and short, because we know that others will know how we act and that we can suffer for it. We care what they think—and what they think can impact how we fare later on. Without social information sharing, the ability to gossip and form consensus around acceptable behaviors and sanctions, society would devolve quickly into a mass of people who take advantage of one another

There must always be a reason, a purpose, a why.

We want to believe. Believe that things make sense. That an action leads to a result. That things don’t just happen willy-nilly no matter what we do, but rather for a reason. That what we do makes a difference, however small. That we ourselves matter. That there is a grand story, a higher method to the seeming madness. And in the heart of that desire, we easily become blind. The eternal lure of the con is the same reason religions arise spontaneously in most any human society. People always want something to believe in”

There are certain essential things we all have in common,” Sullivan said. “There’s a deep desire for faith, there’s a deep desire to feel there’s someone up there who really cares about what’s going on and intervenes in our life. There’s a desire to have a coherent worldview: there’s a rhyme and reason for everything we do, and all the terrible things that happen to people—people die, children get leukemia—there’s some reason for it. And here’s this guru who says, ‘I know exactly the reason.’” It’s the reason behind all cons, from the smallest to these, the deepest.

Reminds me a bit of the scene in True Detective where Rust and Marty attend the preacher sermon - https://www.youtube.com/watch?v=_RfUj09pWfM

The Confidence Game by Maria Konnikova on Apple Books here