A couple of weeks back I spent the evening in an workshop organized by resin.io where we had the chance to play around with some raspberry pis. Once that was done we got to keep the boards for ourselves. With this nice little gift the number of raspberry pis in my house grew to three. Now, as we all know, one's company, two's a crowd, and three's a cluster, so I figured it would be fun to try and get Kubernetes running on these machines. I spent a few hours over a weekend doing just that.

Setting up the cluster

To get a raspberry k8s cluster up and running you'll need the following: 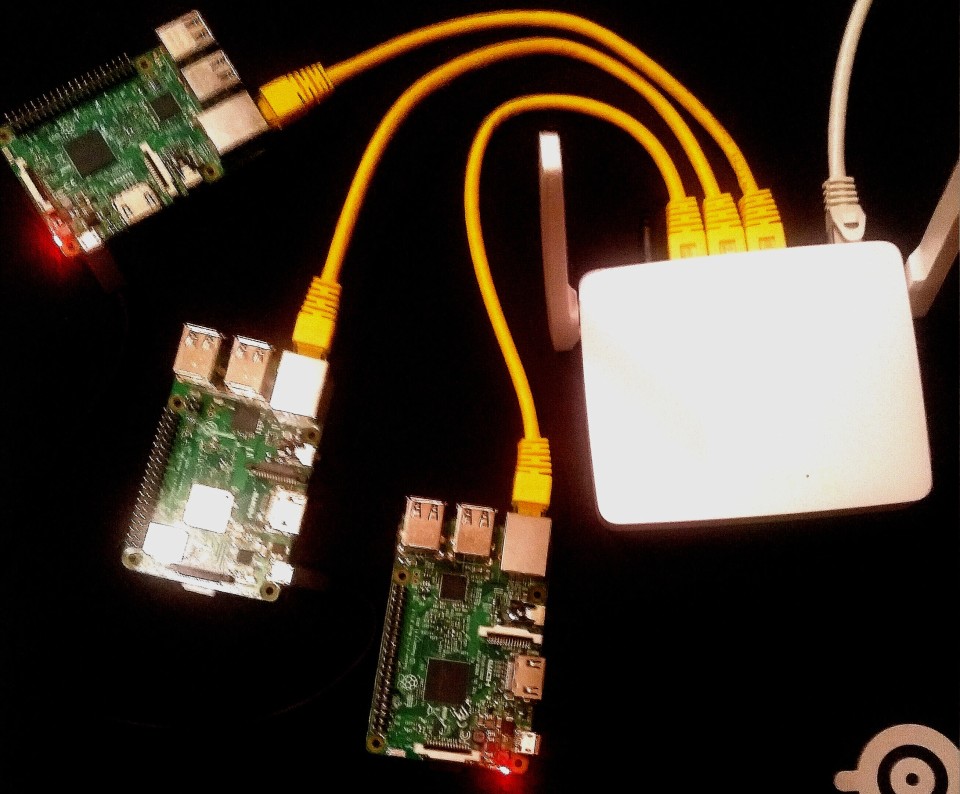 After you've got all hardware in place, there are six main targets to achieve in order to go from a bunch of circuit boards lying around to a k8s cluster:

We'll go through each of these bullet points in greater detail and get everything set up.

For each Raspberry Pi

SSH into each machine in a different terminal, add all terminals to a group by clicking the three squares button in the top left corner, and select Broadcast Group in the same menu. Every command you type in one terminal will then be broadcast to all other terminals. You'll be able to write these commands once and run them across all three Pis.

There are of course various ways of automating this process across machines but using the terminal is a very simple way of doing it. Plus, there is educational value in running these commands by hand at least once.

Your setup should look more or same like in the above diagram. The network router could be the one you probably have in your home already and if you don't have an extra router everything in that diagram would simply connect to the so called network router. I bought a small separate router just for this cluster because I'd like to be able to take this cluster with me and plug it into any network I might find. In any case, to get this to work, you need to control the router that your pis connect to.

Log in to your router's interface, usually at 192.168.0.1/192.168.1.1, but do read your router's manual for instructions, and figure out a way to reserve/assign static ip addresses for each raspberry pi. These settings should normally reside in or around a "DHCP Server Settings" page. The router I bought has them under "IP & MAC Binding". After you've assigned a static IP of your choice to the MAC address of each Raspberry unplug the machines and plug them back in. Refresh your router's interface page and you should see them coming up online at the specified addresses.

At this point, you should be able to ssh into your Pis using your computer and login with password raspberry.

After you're in, change the hostname of each Raspberry using the raspi-config tool.

I do recommend changing the password as well using the same utility.

For Kubernetes 1.7 and later you will get an error if swap space is enabled. To turn off swap run:

If swap is off this command should show no entries:

This installs the latest version of Docker:

You'll get a warning later on from Kubernetes about this very recent docker version being untested but I haven't had any docker related issues so it should be fine.

Add this to the end of the file:

Then restart your Pis

The installation guide is available on the official page here and I will simply paste the same commands here.

VERY IMPORTANT: You should install version 1.9.6 and not the latest. I've had issues which other people online seem to have also run into using 1.10 and the most obvious fix is to simply use 1.9.6 for now.

You will install kubeadm, kubelet, and kubectl on all machines.

You'll have to add --cgroup-driver=cgroupfs as a flag to the kubelet command. Afterwards:

At this point the kubelet service should be restarting continously with the following err:

You can check the kubelet logs with

On the master Pi node

Run the commands given to you:

This will allow you to control the cluster using kubectl.

Make sure to also save the kubeadm join command given in the output. You'll use this on the worker nodes to connect to the cluster.

My master node is a Raspberry Pi 3 Model B+ and I've run into issues installing Weave using the default command described here. I found a workaround in a github issue here and am pasting the modified command down below:

To see your pods starting up run:

After all containers have finished creating, you should see something like this:

On the worker nodes

Run the join command given to you earlier by kubeadm init, i.e.

Go back to the master and run

Wait a few minutes and you should see the status of the nodes change to ready.

Deploy a sample application from your computer

Copy the kube config file to your computer (replace the ip with your master ip):

Check kubectl works on your computer:

Create a simple deployment and service for a markdown-to-html converter web service (using this docker image) by creating a file markdown.yaml and pasting the contents below,

Watch the pod status column until the containers are created and the pods running:

and then test the service (replacing the ip with the ip of your master node): 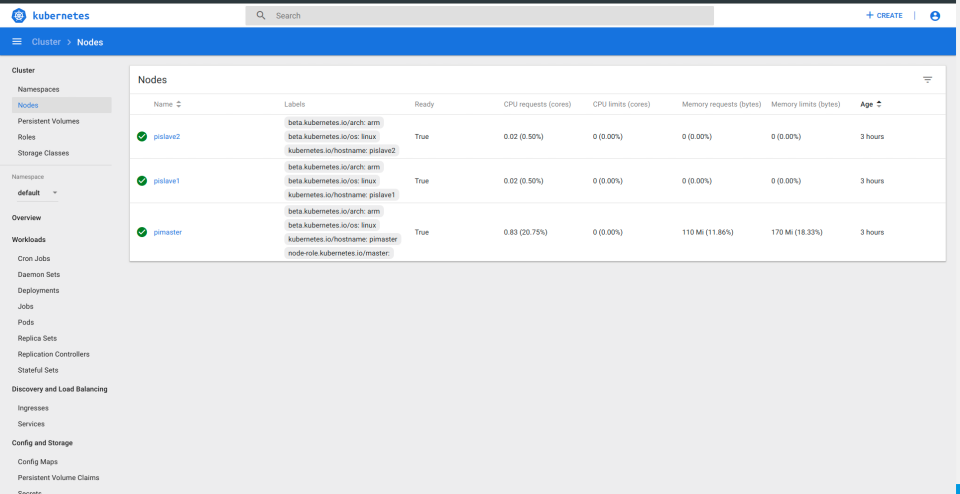 To install the kubernetes dashboard run:

and to get a token that you can login with either read this guide or simply copy and paste the following into a dashboard.yaml file,

Open up a localhost proxy to the dashboard via

and then login with the token obtained by running

Have fun with your little cluster! For more content on the subject have a look at this github gist and go through the comments if you happen to run into issues. I also recommend this great post by Hanselman regarding his Pi cluster.